Economist and logician William Stanley Jevons was nineteen when he arrived in Sydney in 1854 to take up the position of assayer at the new Sydney Mint. During his five years in Sydney, his work left him time to pioneer meteorology, geology, photography and political economy in Australia. His letters to his family give an insight into daily life in the young colony:

I know that at any time you will be glad to have a letter from me, and so, without any particular prospect of a mail, I am going to write you a few pages. I have been much occupied the last twenty-four hours with an incident that occurred to me last night, and which I shall not easily forget. On going upstairs to bed about 10.30 p.m., with a candle, I had got but a short distance into the room when I saw a long irregular black thing lying on the floor. I was puzzled at first to think what it was, but a very few moments of examination were required to decide the question, for it was without doubt a black snake, and still further to convince me, the thing began to move and to hiss! To tell the truth, I then went out of the room quite as fast as I came in (as people say), and, to have him in safe keeping, shut the door. On returning with Mr. O’Connell, provided with sticks, etc., for his destruction, we could see nothing of him, but ultimately discovered him hidden in a corner under the bed, from which being displaced, Mr. O’Connell soon killed him with a few good knocks, but not before he had made a great display of his wide-opened mouth and forked tongue. The fellow was then found to be over a yard long, but though he be no wonder himself, everybody acknowledges it to be the most singular fact they remember of a snake getting into a house, for besides crossing the yard, he had to go up several stone steps into the lobby, and then up long, steep, and rather awkward stairs into the room. Everybody says, too, that he is a regularly poisonous rascal. It is well, however, that it was as it was, for if he had simply moved under the bed before I came in, I should have probably gone to bed with him under me—a very disagreeable thought. I have thus been giving you an account of the affair as lengthily as if I had been talking to you, and I do not know what for, unless for my own satisfaction and amusement, but I hope not to your alarm. It is singular that this is the first snake of any size that any of us have met this summer, and in all probability I may go to bed every day of my life and not meet a second. 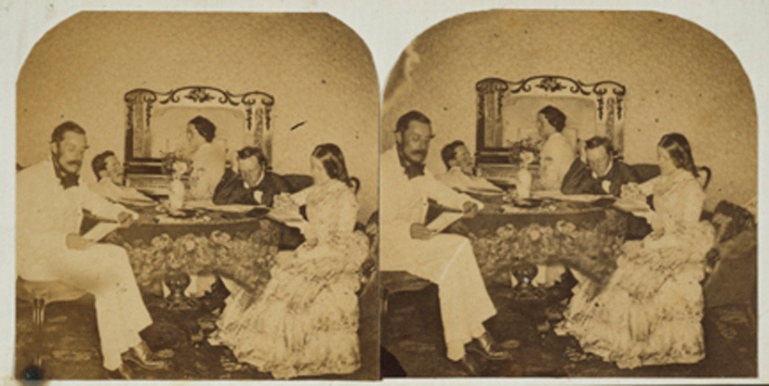 The drawing room at the house where Jevons lived in Double Bay [John Rylands University Library, the University of Manchester]

…Though often rather tired with assaying in the midst of hot winds and the present awfully close weather, I am very jolly and well. Last Monday I went a long walk through the bush and swamps to the shores of Botany Bay, but it is rather an uninteresting place, except for its associations, and I got back without anything worth relating. …

Portrait of Jevons holding cupels and tongs – some of the assayer’s tools, 1857 [John Rylands University Library, the University of Manchester]

In many of your letters, some months since, you noticed my having been to a déjeûner at Dawes Battery last year, and seemed to take pleasure in it. The same thing came off yesterday again, being a general holiday for the anniversary of the foundation of the colony; but as Captain Ward, of course, knows ten times as many people as he did then, it was on a much more extensive scale. It was most excessively formal; but I found it easy to get on without being noticed for any peculiarity among the number of people, and I was somewhat pleased to have an opportunity of observing the Australian aristocracy. That you may understand the occasion of the whole affair, you must know that the Sydney people, liking holidays, make the anniversary day a good excuse for one, and the whole town turns out in a way unknown in England, unless it be a Good Friday or a Fast-Day. The chief attraction is the regatta, the principal one of the year, and the points at Fort Macquarie and Dawes Battery are crowded with people, as well as all other places within sight. Captain Ward’s house, on the top of the point, has the best view of the whole; and from the pictures you have of the harbour you can imagine what a really beautiful scene it is to see it covered with different yachts and sailing boats, innumerable row boats, many of the large coasting steamers strolling about with bands, and full of visitors, and all the shipping and flag-poles fully decorated with flags. Any one arriving from sea on a regatta day must indeed think Sydney a fine place.